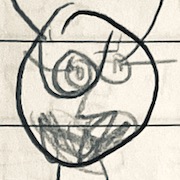 calm, almost too calm
1. Name of this website.
2. Description on a police custody record: ‘RISK ASSESSMENT: D[etained] P[risoner] is calm on arrival, almost too calm’.
3. State of the author when in stressful situations.
4. Title of a chapter in the book Being Autistic.

Read the latest posts or browse the archive. 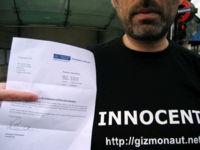 A selection of articles

A few soapflakes from EXE Magazine:

'Pataphysical, biographical and other occurences

Pictures of the discontinued line of suspicious clothing:

A smartphone and a Bluetooth headset are some of the tools that have hanged from my batbelt. I sometimes carry other stuff.

The name of this web domain – a portmanteau word made from ‘gizmo’ and ‘astronaut’ – meaning an explorer of things you can’t put a name to.

An astronaut is a ‘member of the crew of a spaceship or other spacecraft that travels beyond Earth's atmosphere, or someone trained to serve that purpose.’, ‘From astro- +‎ -naut. Coined from Ancient Greek ἄστρον (ástron, “star”) and ναύτης (naútēs, “sailor”).’ (Source: Wiktionary)

The first use of the word ‘gizmonaut’ appears to be in ‘programmers are almost universally gizmonauts’ by Lou Grinzo (Source: EXE Magazine, November 1999) and, with a different spelling, in a book titled The Gismonauts written by Keo Felker Lazarus (Published in 1981 by Modern Curriculum Press; ISBN 0695416073)

Many thanks to everyone visiting this website. It has been developed while listening to Nahmi’s music.