The National Counter Terrorism Security Office (NaCTSO) ran a counter-terrorism campaign for the travel industry this summer. It features a video titled How To Identify and Respond to Suspicious Behaviour that basically advises that atypical behaviour is suspicious and should be reported, i.e., autistics – and other neurodivergents – are suspect.

This campaign is problematic as it highlights that autistic behaviour should attract attention from police and security personnel. We, autistics, tend to have our idiosyncratic behaviours everywhere we go, and increased stress in a public space is likely to exaggerate our atypical behaviours. (This campaign worries me and consequently has raised my stress level, especially when going through transport hubs, as obviously I do not want to be wrongfully arrested again.) This counter-terrorism campaign is likely to exacerbate some of the very behaviours NaCTSO deems suspicious.

I have done all of them. I am autistic, not a terrorist.

A few of my photographs of CCTVs and one of a police officer observing from behind a curtain in Downing Street: 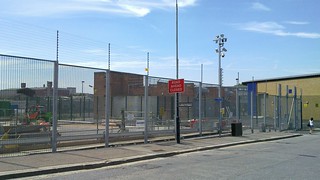 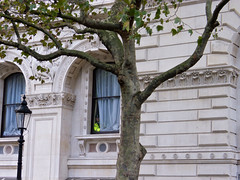 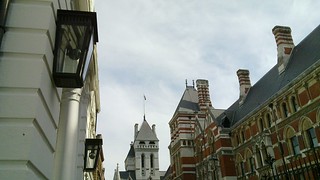 Terrorists will never be reliably identified. That is just not possible. As there are many more neurodivergents (a prevalence rate of 1% for autism is now considered a low rate) than terrorists (often mentioned as estimated to be about 3000 in the UK), identification measures with many false positives, such as those promoted in this counter-terrorism campaign, will not increase our security but will detrimentally affect neurodivergents. Focusing on atypical behaviour risks ruining too many lives and is not effective in protecting us from terrorist acts.

On a forum using Chatham House rule, in a discussion on this topic, a police officer suggested:

I think this is where we need to encourage autistic members of public to carry an autism card that can be verified by police - verification being important as cards would otherwise be abused by criminals. Anyone being stopped due to their autistic traits could produce their card and (in theory) be on their way quickly once their details have been confirmed.

As much as it would be nice to have a card that could just let you out of any situation, I see the role for autism cards as a communication aid, not as an enhanced privilege card. The card remains in the control of the autistic individual who can choose when to use it to facilitate communications. If well designed the card can be used in other context than just policing. Not all autistics will carry one and not everyone who carries one will want to use it. How autistics are being treated should not rely on the presence of such a card. The card has a role in helping communications by indicating some common or specific issues and possibly indicating the contact of someone to contact in an emergency. It is especially useful for non-verbal neurodivergents and those who become non-verbal in stressful situations such as an arrest.

Also for a verification scheme to be relatively robust would require a costly infrastructure including a (police) database of autistics. The history of databases identifying minorities raises many concerns. However, the main issue with such a system is about who has the power over our autistic identities. Currently the medical profession acts as a gatekeeper of the diagnosis. This is based on the medical model and is far from ideal. Services should be available on the basis of needs, not medical diagnosis, and one’s identity should not require an external gatekeeper. Adding to that, a police 'verified' system, would move some of the medical control into the hands of the police, this is the wrong direction of travel. We should move towards the social and neurodiversity models, not towards an even more authoritarian model.

Vigilance for hostile reconnaissance may not be the best counter-terrorism approach as it likely will criminalise a large population through false positives (and will waste police time). The problem is made worse by the ease with which some police forces may arrest people compared to their reluctance to apologise and offer compensation for erroneous and unlawful arrests. For instance, after my unlawful arrest, it took me more than four years for the Metropolitan Police Service to admit the arrest was unlawful and apologise (and twelve years later, their legal department still retains some files about that arrest).

The traumatising impact of ending in police custody for autistics, and other neurodivergent individuals, potentially targeted for their atypical behaviours by this counter-terrorism campaign can be serious if it ends up causing more wrongful arrests while not making us safer from terrorism.