We do not want to be better served by the justice system, we want a better system 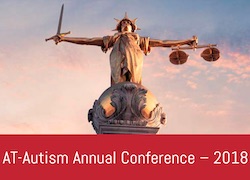 AT-Autism’s annual conference on ‘Rough Justice? How is the justice system serving autistic people?’ was distressing for many of the autistics attending (and some had to leave because of it). Most of the presentations were about tinkering on the edges of the system: improving prisons, the Broadmoor high secure psychiatric hospital, probation services, etc. Very little was said about changing a system that discriminates and oppresses the autistic minority. It is likely that the lack of openly autistic speakers contributed to this.

Gary McKinnon and Lauri Love, whose extradition to the USA were both blocked, were mentioned several times. However Talha Ahsan who was extradited a week before Gary McKinnon’s extradition was blocked was only mentioned when I did in a question. There was no talk of intersectionality, even though autistics are not all white men!

No presentation either was about the injustice of all the innocent autistics caught in the criminal justice system. My unlawful arrest by the Metropolitan Police Service, that luckily didn’t go to court, was so traumatic that it has been life changing. It is difficult to imagine what the fellow autistics who have had to or are going through court, prison, secure hospitals, probation, etc., many of them innocent of the offence they are suspected of or charged of, have to endure. Even some autistics convicted and sentenced to a life term for murder have not committed the crime for which they have been convicted for, such as is the case for Alex Henry, thanks to the law of joint enterprise.

Kleio Cossburn, a former police officer, made a very interesting presentation in which she talked about how she found, after a traffic accident, how different things were on the other side of the desk where police officers usually sit. However not many police officers experience this, and fewer realise the trauma they often cause when arresting autistics, especially when innocent. Karen Todner, in her fascinating and harrowing presentation of several of the cases she has worked on, pointed out that when she started her 30-years career legal aid solicitor offered as good representation as private ones, and prison was a safe environment. This is no longer the case. She quoted a probation officer describing the current situation as: ‘we have gone back to the dark ages and we lock up those who are autistic because we don’t know what to do with them’. And that includes innocent, black, women, muslim, etc. autistics, not just autistic white men having committed an offence. We don’t need more autistics having a better time in the criminal justice system, we need a system in which autistics are not locked up.

‘Why a European autism research program has sparked fears of eugenics’

Joe Lo, a London-based freelance journalist has written an article looking at some of the concerns the autistic community has about the disturbing Autism Innovative Medicine Studies-2-Trials (AIMS-2) European research project. The article, titled Why a European autism research program has sparked fears of eugenics, was commissioned by The Establishment, an American ‘multimedia site run & funded by women’. Here's an excerpt:

Panda Mery is a university researcher in London and a former journalist, lecturer, and software engineer. He’s also autistic, and when he found out that a huge U.S.-based charity called Autism Speaks was involved in the AIMS-2 project, he grew highly suspicious of what “solutions” this research was seeking out.

With alarm bells ringing, Mery requested a copy of the AIMS-2 grant agreement under EU transparency rules. On receiving the 664-page document, the alarm bells’ decibels became deafening — one section in particular troubled him:

Currently, there are no effective medical treatments for the core symptoms of Autism Spectrum Disorder. Our overall goal is to address these shortcomings by adopting a precision-medicine approach to better target treatments to patients through the use of validated stratification biomarkers and by testing novel or repurposed drugs.

For Mery, targeting the symptoms of autism sounds a lot like ‘curing autism’ — but autism is not a disease, it does not need curing. Cos Michael also objects to this language of “core symptoms.” What are they? Are they good things? Bad things? Who decides? Because they keep changing. Through history, the ‘core symptoms’ of autism have changed. It’s about what other [non-autistic] people call them. And ‘targeting them’? Why? Because we want to take them out? It’s so full of…well, hate, frankly.”

*I mentioned to Joe Lo the Tree House Town Hall 2008 talk by Bob Wright, the ex-Chairman and founder of Autism Speaks, in which he explained ‘I see autism through the lens of cancer’. (The video is a bit shaky, but it’s wonderful to see Jon Snow encouraging all present to flap.) That talk followed Something About Us, an excellent film about the rights and voice of autistic people by Dinah Murray and Jes Benstock.

For more details about AIMS-2 check out these blog posts:

About spoons and spudgers(*): community repair for neurodivergents

This post explores how repair activities and, more specifically, community repair events are well suited to many autistics and other neurodivergents, and how to ensure that these events are welcoming to all neurodivergents. Its content is based on notes that have been refined in presentations and discussions at Fixfest 2017, Fixfest UK 2018 and the PARC Autistic Fringe (Glasgow) 2018.

Some recommendations (mostly for events’ hosts)

About the Restart Project

The Restart Project helps people learn how to repair their broken electronics, through our Restart Parties: free community repair events where participants can work with a skilled volunteer to fix anything with a plug or a battery. They’re spaces for learning skills and reflecting about how we consume in the first place. Repair is fun, it’s social, it saves money, and helps us be creative and constantly learn.

The Restart Project has been proactive in encouraging inclusivity across genders, in particular with the Rosie the Restarter skill shares. Nothing similar yet exists for neurodivergents.

About neurodiversity and autism

‘Autism is a way of being. It is pervasive; it colors every experience, every sensation, perception, thought, emotion, and encounter, every aspect of existence.’ Jim Sinclair

‘Neurodiversity is the diversity of human brains and minds – the infinite variation in neurocognitive functioning within our species.’ Nic Walker

Autistics have spiky profiles, an unusual combination of abilities and challenges. Autistics can find some tasks easy and others difficult, and this may change depending not just on the task, but also on the environment, and recent experiences. It is common for autistics to be over (hyper) and/or under (hypo) sensitive to some of their senses; and there are more than five, e.g., sight, hearing, taste, smell, touch, temperature, pain, kinaesthetic sense (proprioception), balance, etc. Processing sensory information can be overwhelming.

If you have other suggestions to make community repair events welcoming to neurodivergents, you can post in this Restarters.net thread (free registration required).